The judges have gone around to rate your entries in the Stirburgh castle town, and it's time to announce the results! It was a hotly contested finale, with several entries being within a fraction of a point to each other! Without further delay, our winners:

Congrats to all builders, everyone seems to have put a lot of effort into the area, giving it a unique look! Everyone has been granted their Merit Points; Roen, I'll see you in-game to pass over the Ceremonial Sword. You can see the full list of entries with the judges' comments right here.

We ended up with an interesting mix of styles overall; many players seem to have enjoyed the freedom of defining their own lot limits and I consider this a successful experiment! Some of you ran out of time to complete your builds, and I urge you to go back to finish them, as everyone seemed to be heading in a good direction. Anyone who wants to do additional builds is now welcome as well, no matter if you participated or not, as the building restriction has been lifted.

As a reference, Stirburgh has been added to our list of themed building sites. Give it a look if you want to create something and need a little inspiration!

Last note, we have the following guideline that applies to all contest areas, including this one: "In all contest areas, builds that are obviously incomplete, abandoned or not matching to the given theme might be removed at the staff's discretion after going untouched for two months."

Again congrats everyone, and see you next contest!

All servers are being updated tonight to Java 1.16.2. Java players, make sure that you're using that latest version to connect! Bedrock players, you're already good to go.

This gives you access to piglin brutes, waterlogged lanterns and horizontal chains.

Full Bedrock support is a go!

I've completed my work to make sure that Bedrock players are first-class citizens on the Creeper's Lab, and I'm now happy to open the gates of all servers to everyone!

Bedrock players (Windows 10 and mobile) can now access everything that Java players can. This includes all game servers, web profiles, achievements, and more. New players, make sure that you're whitelisted to get started. Existing Java players, add your Xbox Live Gamertag to your networks to continue. You can easily see who's playing on a Bedrock client as their usernames are prefixed with a ~tilde.

As the display of stats on your web profile goes, plus achievements tracking, the statistics of the Java and Bedrock accounts of the same player are combined. For example, you could break 5000 blocks on your Java account, another 5000 on your Bedrock one, and that would be enough to trigger Destroyer for breaking 10,000 blocks in total. If someone is registered on both Java and Bedrock, the Java username and player skin will be used on some displays.

As a reminder, the limitations that I have listed in a previous news post for Bedrock players are still valid. Most notably, enchantment tables don't work yet, along some special crafting and inventory locations like stonecutters and horse inventories. Player skins don't always display. This is being addressed by the team developing the compatibility layer and is expected to get better in the coming weeks and months.

Do you know someone playing on a Bedrock platform that might be interested in joining us? Pass the word around, we're ready to welcome them! 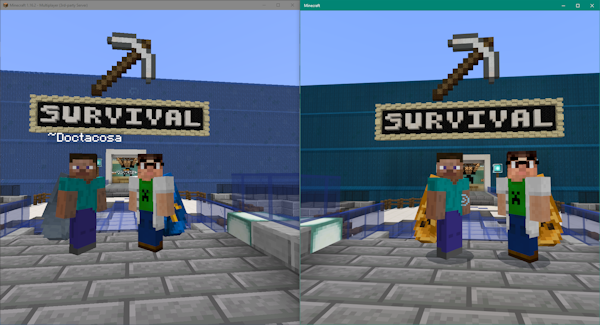 I've pushed to all game servers support for 1.16.2. This allows you to connect using .2 right away, yet we're still running .1 internally, so don't go looking for Piglin Brutes right away!

While you can connect using either game versions now, our requirement will move up to .2 eventually, so I suggest that you update your game whenever you can so you don't forget about it later.

Additionally, the internal version of resource packs has been updated on the new game release. Nothing changed besides that, so if you recently downloaded Sphen's update, you're still good to go. You will have to re-set them, though, as they will show as outdated (even if they work). Alternatively, you can grab the newly updated versions here.

Minecraft 1.16.2 is being released today on both Java and Bedrock. This new version is incompatible with the previous one, so please wait a bit before updating! While I expect this to be a fairly simple update, which shouldn't take too long, the addition of new features could cause a bit of delay. I'll post an update when I have more to share.

Bedrock players, as updates on that platform are mostly automatic, this isn't something that you have much control over. I'll aim to have some form of compatibility added as soon as possible to allow you to continue playing.

UPDATE: The lobby is now compatible with Java 1.16.2 so we can get in touch with players. Bedrock players can use any version in the 1.16 series to connect.

I'm pushing today a set of changes and improvements to the perks for my Patreon backers, here are the full details!

I'm introducing a new bonus for the VIPs: the ability to change the color of your username in the in-game chat! You can type /customcolor to view the options available and select one. The color of the custom titles remains tied to your player rank so that others can quickly identify that.

The system for the particle trails you can wear has been rewritten from scratch! The same options as before are available but will now synchronize across all servers: select your trail using /trail and it will automatically follow you as you move from one world to the other! As this uses a new plugin, your existing trails have been deactivated; you'll have to make a new selection.

I've also used this opportunity to introduce nine new trails, with many that include the new particles from the Nether Update! Try them by using /trail and see if one suits you.

To simplify the list of tiers available, I've decided to retire the $2 level and move the custom titles to the $3 tier, forming with the particle trails a cosmetics package.

Everyone currently set at $2 gets to keep the ability to change their custom titles indefinitely, this only applies to new subscribers.

This one applies to everyone: the orange asterisk that many have grown to love next to their usernames now also extends all the way to the forums! It's displayed in your profile and alongside your posts in the discussion topics. I'll see in the future about extending that display to other areas, without making things look overly busy.

PLUS, adding more value to the deal, all backers now have the option to link their Discord account to get a color highlight there! As the orange color might be getting mixed up with the orange of ops, I've opted for a cool teal. To get this applied to your username, you'll have to go on Patreon to link your account.

Staff members, since you can only have one color on Discord, your actual rank will override the Patreon perk.

And that's it for today! If you like the work I do in building up and maintaining the Creepers's Lab, and you're in a position to afford it, I'd appreciate it if you could consider supporting me on Patreon. Your contribution can be as little as $1 a month; in exchange, you get some of these new perks described above, plus more like yearly or even monthly postcards!

Following up on last week's introduction of Bedrock support, we're now expanding it to more areas!

As of now, players on Minecraft Bedrock (mobile and Windows 10) can now access Tasmantis (survival) and Kenorland (UHC)! This is in addition of the lobby, PvP and parkour that were already enabled. For these, you'll need to be whitelisted properly; it's as simple as viewing your networks page and adding your Xbox Live Gamertag in the appropriate field.

There are a few known limitations at this time. The following might not be working properly yet:

There might also be some minor visual bugs, but nothing that would impede your survival gameplay. Work on this is moving forward at a brisk space from the compatibility team, and we can expect things to smooth out over time.

As far as our custom features go, not everything is working just yet, and the web profiles will ignore most of your Bedrock actions for now. I'm continuing work on that front so it's fully supported soon, ensuring that all players are on the same footing.

If this proves to work well, the next step will be to add full access to all servers!

It's a new month, which means a new challenge!

UHC makes a return in the lobby, with the four goals that you might be familiar with. You'll be visiting a fictionalized version of the island of Vormsi, off Estonia. Enjoy your cheap vacation, but remember to keep an eye open for any angry local - you die, you're kicked out of UHC for a week!

This also means that a new raid boss roams at the Hunter's Lodge. The Ancient Pharaoh has awoken from his slumber and rumors say that he's angry. Plus, there's another creature of unknown origins that appeared in the same area. You'll want to avoid it... or maybe challenge it for some rare spoils?

The three regenerating structures of the Halls of Nyx, Requiem and the Overlook Hotel have been updated in preparation for an upcoming fourth one - a Bastion! Most notably, some drops have been updated and their functionality has been fine-tuned so they all work on the same model, each respecting their own theme. Why not pay them a visit and see by yourself?

It's been a month already since we've introduced the new Nether! Did you enjoy the refreshed scenery so far?

We're moving forward with introducing trades for the rarer materials. You can now find ancient debris, netherite scraps and netherite ingots at a few key locations:

Of these, only the first one is accessible using basic supplies, and you'll have to pay the price! All others are in the Horsemen areas and will require you to complete some of the local challenges.