The two main versions of Minecraft, Java and Bedrock, have been aiming for feature parity for some time now. While we're not quite there yet, the two are getting close enough where it's getting realistic for both sets of players to meet each other online at last. This means that players of Bedrock Edition on both Windows 10 and mobile can now jump in with us! Unfortunately, console players can't access community servers due to restrictions imposed by the various manufacturers.

For the first phase of this integration, Bedrock players can now access the lobby, plus the PvP and parkour minigames. If all goes well, the access will be extended soon to the survival servers.

You've got a copy of the game on Windows 10 or mobile, and want to jump in with us? Point your client to play.creeperslab.net (on the default Bedrock port, 19132) and get started today!

To prepare yourself for the full access, you'll want to get whitelisted. If you already have a forum profile, go to edit your Networks and add your Xbox Live Gamertag in the appropriate field. Save, and that's it - you're done! If not, consider registering to access the full set of features!

There are a few important points to note:

Existing players, have fun trying this out. New Bedrock players, welcome! If you notice something not working as you'd expect, please let the staff know!

It's time for our next building contest! This time, you're tasked with building a medieval-style castle town! While you're working to establish the town itself, I'll be building the castle atop the nearby hill.

Make a medieval-style build that you believe is fitting of a castle town! Use the materials that feel appropriate to you to create the proper atmosphere; you'll be judged on your choices in building type, materials and creativity.

This time around, no lot borders have been drawn, nor are there building limits to follow: realism is your guideline. This is a medieval setting, and building codes didn't exactly exist at the time; mark your limits so others don't encroach in your space. Two main streets have been drawn as a starting point; you can add your own paths or streets as you wish. The area for this contest is delimited by the entire desert biome, so you can choose to be right in the middle of the action or be on the outskirts of the area. Make sure that you label your entry with your player name somewhere!

You can make multiple entries if you're feeling creative, but only one will be judged. Make sure it's marked appropriately!

Note that this area is NOT mob proofed, so there is a chance of being attacked at night. Remember, this is a survival game, so you're expected to survive!

If this is giving you trouble, remember that the invisibility perk available through Merit Points can be of help. This sets you invisible for 30 minutes at a time, preventing most monsters from finding you.

You don't like sand? It's coarse and rough and irritating, and it gets everywhere? Feel free to replace the ground by grass or any other material of your choosing.

I'm giving you four weeks, starting TODAY. The contest will thus end on the 15 August at 23:59, Eastern time.

You'll be heading to Stirburgh, up North. On the overworld, from Central, ride the Transcontinental for 6 minutes until you see the Stirburgh ramp to your right. From there, follow the path!

Through the Nether, follow the North line to the first substation, Great Oak. Get to the top floor and head for Doctacosa's Fiefdome. Once at the other end, make your way to the train station, and take the rail to Stirburgh.

The top three winners will each earn the following amount of Merit Points:

Everyone else who participates will get 1 as well.

Additionally, I'd like to have two extra judges to help me rate the multiple entries. Please get in touch with me if you're interested! 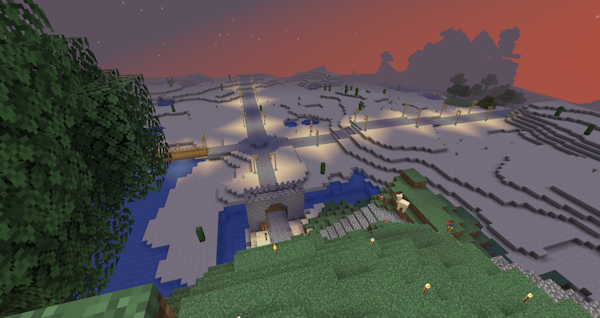 I'm implementing today an improved method for handling multiple game versions on the network. Previously, anyone not using our main game version (1.16.1 at the time of writing) would be limited to the lobby. This would give us a chance to talk with them and explain the version change process if needed.

Now, we're adopting a different approach with a wider support. The PvP game server will now be accessible to all players using 1.8 and up, so multiple players using different versions can all play together at the same time! An important detail to note is that the server itself will use our main game version, that is with the Combat Update mechanics, not the 1.8 ones.

Since most players who connect using older game versions are likely looking for PvP, players using any version below 1.13 will skip the lobby to go directly to the arena.

With the lobby now accessible to players using Minecraft 1.13 and higher, so will the Parkour courses. This gives more players a chance at trying out these challenges without having to bother with a version change or registration!

To ensure that everyone is on the same playing field in survival, the proper version will continue to be required there.

Thanks to Sphenicus' efforts, our official resource pack has been updated! If you're using any of the older versions, I recommend getting the new version for various corrections, improvements and surprises.

New to this release are updates to most of the paintings, with new and updated visuals. Plus, a new music track was introduced for the disc that was added in Minecraft 1.16!

For those unfamiliar with the resource pack, it's a light addition to the core game. No blocks or mobs are changed, with the exception of creepers, so the visuals stay intact. The pack focuses on replacing some sounds, music tracks, all paintings, while adding a few surprises true to the Creeper's Lab. Plus, it adds conveniences like a reduced pumpkin blur.

Give it a try! You can download it from the resource pack page.

All science areas are back online!

I know that many of you have been waiting for this, and I'm happy to announce that the science areas are all back online, including the Creeper Citadel!

For players that have already completed part of the challenges, some items have been overhauled and you're eligible for a trade. You can find the full list here; to trade them in, please head to the underground of the Post Office at the Citadel.

Some new item trades have been added at Moosemart, they will be added later today to the Resources forum. As a reminder, this is where you will find a detailed description of the various areas, trades and items available for the Horsemen Areas, Challenge Missions and other challenges.

All servers have been updated to the latest and greatest on Minecraft 1.16.1; it's time to update your client to discover the Nether Update! There are some important things to note, so please read on.

Many of you will be excited to go down under (no, not to Australia...) and discover what's there, or to mine all of the new material. To help with this, we're introducing three new Nether worlds:

Laurasia's existing Nether will be locked down to the current structures to focus on rail transport. Again, for mass Nether mining, visit Tasmantis now! To build, see Superia.

All science areas are now coming offline as they need updates to work properly under the new game version. Further announcements will be made as the areas come back online.

To solve key problems on inventory synchronisation across the survival servers, the entire system has been rewritten from scratch. Something important to note is that the position of all players has been reset to the spawn of each world. You will need to head back home on your own. To help with this, we're making an exception so that the staff will teleport you back home if you ask for it. This can only happen once per server per player. Make sure to set your spawn right after if you haven't already done so!