Research on the human body has been progressing well. The latest experiments have yielded new results to reinforce the previous hypotheses, while new side effects have also been uncovered. These effects have been positive overall, opening up new possibilities on the core subject. I've taken to applying these findings to mannikins emulating human shapes, and after some adaptations, they've molded themselves to my needs. The next steps will continue under my supervision.

There seems to be an endless supply of volunteers willing to participate in these experiments, thankfully. Another win for science!

A common request lately has been a way to customize armor stands. It's possible with staff-only commands, but while the stands themselves have a lot of possibilities, most of these are not accessible through standard survival gameplay rules.

To give everyone a chance at having more controls over the stands, I've introduced a special book that allows you to change any of a stand's properties. This includes adding arms to hold items, removing the base plate, posing them, or even making them invisible entirely so that only held items are shown.

You can now go to Doctacosa's Study, at the Citadel, and access the research room in the basement. It's located in front of the exp lab. There, you'll find a button to give you a copy of the book to bend armor stands to your will. 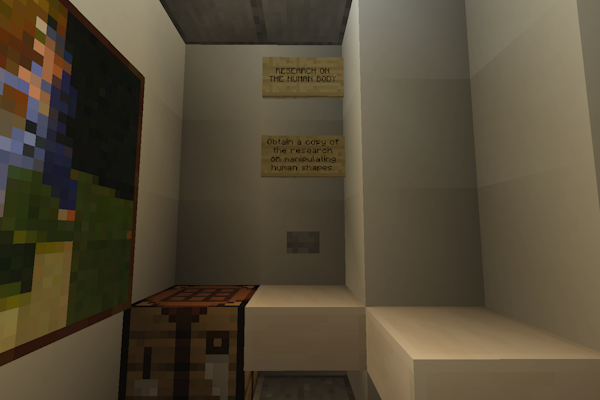 To use it, stand next to the armor stand you want to change. Then, to confirm you've got the right one, open the book and click on "Check target". The active stand will get a white glow for a few seconds. From there, you can reopen the book and change any of the stand's properties with a few clicks.

This should go without saying, but you should only change the armor stands that belong to you. To limit the risks, the button to dispense the book is only available to trusted players.

Note that these books are powered by pixie dust, and as such are very fragile. If you happen to disconnect while holding them, change servers, or leave them in an enderchest, they will lose their magic. The only safe storage spaces are chests and item frames. Should a book stop working, burn that copy and go claim another one at the Citadel.
[Follow the discussion!]

Minecraft 1.15.2 has been released toda- yesterday with a variety of bug fixes and improvements, and the Creeper's Lab has made the jump too! Update your game client to be able to join anywhere beyond the lobby!

Two notable changes are taking place for us. First, the Wandering Traders are being disabled across all servers. They have been an ongoing source of server lag since their introduction, for few benefits in return. Those interested in their trades (or their llamas!) will find them available at Moosemart.

Second, a bug fix worth mentioning is about furnace minecarts. They will no longer lose their speed after turning corners, making them useful once again!

The map plugin itself hasn't been updated yet. While you can still view the maps as usual, they won't show player positions or new changes until its author has a new release available. This will probably take a few days.

UPDATE: The maps are back in working order!

Available today is a fairly large revamp to the Merit Points system. Here's everything that's now available for all to use!

While the points used to available for cash-in during Events Nights only, we're expanding this to the whole week, with a new costs structure! First, what was already available by using /points PERK:

flight - flight: Get the ability to fly for 15 minutes.

xp - XP boost: Double the XP that mobs drop for the next 30 minutes.

As a convenience, at the end of a flight period, you'll now be gently let down instead of crashing instantly to the floor.

These are joined by four new perks:

keepinv - Keep inventory: Single use. You keep your current inventory and levels if you die. If Events Night is ongoing, this won't be used up.

invis - invisibility: You get to be invisible for 30 minutes. This is great for outdoors builders in unprotected areas, as monsters won't attack unless you're very close or outright hit them.

tardis - TARDIS: Single use. Sends you instantly to the End of Time so you can exit at any location. Make sure you're somewhere on Laurasia before using this!

weather - Weather: Clear the rain and keep it that way for at least 15 minutes.

Most of these stay with you through disconnects and server changes, except the clear weather option as it's set per world. All of these are available 24/7 at the cost of 2 Merit Points, except the End of Time access which is worth 4. During Events Night, these prices get slashed by half!

Also new are Merit Vouchers: for 10 points, you can gain a Merit Voucher which can be exchanged for many things. Visit the fifth floor of Moosemart, at the Creeper Citadel, to get vouchers and view the full range of trades. This includes replicas of past event items, shortcut items for those exploring the science areas, cosmetic costumes of science mobs, heads of previous staff members, and even some exclusive items! You can head directly to the Hunter's Lodge to access any of the existing raid bosses, too.

Future draws for various items, real and digital, will also happen where the Merit Vouchers will be used as participation tickets. This replaces the end-of-the-year prizes that were offered previously to the players with the most points.

How to get points

All this is fine, but how does one get points? This is detailed on the Merit Points page. To summarize, there are three main sources:

Remember that you can vote for us every day, even if you're not interested in the points themselves: voting gives us more visibility and helps to attract new players. Give us a hand whenever you can, it's free and quick for you to do!

The rules for the network have been expanded and clarified a bit based on recent feedback.

Most notably, what was an unwritten guideline has been formalized: religion and politics discussions are now frowned upon. While both can make for fascinating exchanges, they can also be very divisive. We're here to have fun, not to argue endlessly at each other, so this isn't the place for these.

Additionally, we had a long-standing policy against Endermen farms in the End. Since there are many other sources of exp nowadays, that restriction is gone. As a reminder, Laurasia's End gets reset periodically, so any permanent structures should go in Rodinia's End.

The in-game /rules command will be updated accordingly at each server's next restart.

This month's challenge is Race Away, accessible from the lobby as always. The goal is to run straight East, to get to the highest X coordinate possible during the month. If you die, you get sent back all the way to the beginning with no inventory, so be careful! The world available to you this time around is rich in some resources, but notably lacks a floor. Beware of any missteps... You can move between -1000 and 1000 on the Z axis. Due to a lower amount of food than usual being available, your hunger will slowly refill over time.

A new raid boss will be available later today at the Hunter's Lodge. This time, the dreaded Nyx is to be challenged!
[Follow the discussion!]
<< Previous | News archive | Next >>