The Games section is live!

As previously announced, the Games section is now live!


About the Games section and how it works

The Games section can be easily accessed from anywhere at anytime by using the Lobby. When in-game, type /lobby to access it, then simply walk (or run!) up to the Games section. Various portals found within will bring you to your destination. You can leave the games at any time then travel back to wherever you were in survival gameplay.

There are a few important points to keep in mind:

There is no cross-server chat. When you enter a game, you can chat with your fellow competitors, but not with anyone in the lobby, playing Survival, at affiliates, or IRC users. Likewise, to cut down on the amount of useless notifications and chat, whenever possible, each game instance will be isolated. That means that people playing in, say, a PvP arena will not be able to chat with fighters in another arena. If you want to keep on chatting with people on the global network, I suggest that you join the chatroom.

Supervision will be mostly automated. Unlike the Survival servers, odds are that the staff won't be keeping a near-constant eye on the place. The game servers have been configured to not allow any blocks to be broken, and various chat filters have been implemented to keep things as clean as possible. Repeated offenders and general nuisances are likely to be banned nonetheless.

There is no need to be registered! Visitors can freely jump in and play games at any time, hopefully giving everyone more people to play with. Feel free to invite your friends over for a quick rounds, even if they don't feel like registering, since they don't need to for this!


With that said, the first game to be made available is...

After a limited trial run last year, the popular TNT Tag is making its grand return as the first 24/7 game available on the Creeper's Lab!

How it works is simple: several contestants can join a dedicated arena. Once enough are in, the first round will start: some players get randomly cursed with a TNT block on their heads, while others are empty handed. The goal of the game for the first group is to tag others with their TNT, passing it along. Those that are empty handed must flee and remain clean. At the end of a countdown, the TNT explodes, removing from the game those that didn't manage to pass it off in time. New assignments are set, another round starts, and the whole thing continues until only one player is left standing!

Right now, one arena is available to participate in: the Dome. More will be added as needed, either to accomodate more players or to offer a different landscape to fight in!


As I've indicated previously, there are at least two other game modes scheduled to be added to the Games section in the coming weeks. More details will be posted once they're ready, so please look forward to more content!

If you have any questions, feel free to reply to this news post.

Event: launch of the Games section!

Everyone is invited to join us next Events Night, this Saturday at 10pm Eastern time, for the launch of the Games section of the Creeper's Lab! You'll be able to see how it's all structured and play the first rounds of what will hopefully be many! A first game will be introduced that night, with at least two more set to be added in the next few weeks.

I'm not telling just yet which game will be the one first available this Saturday, but I can give you a hint: it's the return of something that some of you had a chance to try in the past, and that you've been clamoring to see again ever since...

The season may be cold, but many of you showed good spirits in participating in the Christmas village contest last month! Once again, three judges went from entry to entry, scoring them from 0 to 10 and providing comments. This was done by myself (Dr. Cossack), Magic, and a special team of MediaKlepto and her mom, the latter being known for loving such villages!

Without further delay, our winners...

Congratulations to all three, plus all other contestants for their efforts! You can view the full list of entries, plus their scores and attached comments, on the results page.

Kagato wins a chest filled with light sources to help him through the long winter days, plus 50 Merit Points! Anonymous_SoFar gets 30 points, while AshaLina earns 15. Everyone else who claimed a lot and did something to it also earns one token Merit Point. You can now view the updated leaderboard to see how things are coming along!

The next seasonal event will happen this February and will feature something completely new for the Creeper's Lab... Stay tuned!

At long last, I'm happy to announce that the achievements system is BACK ONLINE! It's been a long time, so I'll reexplain how it works for the sake of our newer players. You can also find further down some information about how things evolved since the last time this was available.

The achievements system on the Creeper's Lab is a completely separate thing than the ones available in vanilla Minecraft, with different targets. These go from the simple (Tarzan Hates Jungle - Destroy 100 vines) to the more challenging (Master Creator - Place 100.000 blocks), making you travel the server (Sunset Ride - Ride the Transoceanic Line) or scratch your head (Master of War - Unlock the power of magic). As of this writing, there are a total of a HUNDRED achievements available, all of which return from the initial set (more on that below). You can see the full list on the forums, while you can track your own progress from your profile.

The newly earned achievements can be viewed on the website itself, below the list of servers, and are also announced in-game by a global announcement. These lists are updated every 30 minutes, so you won't immediately be able to tell if you've earned one. To get an initial update on your profile, you'll need to login to any survival server and wait a bit. This means that, in the upcoming days, you'll see plenty of messages as people make their initial login!

Note that the statistics used for this are only pulled from the survival servers. Actions done at affiliates or in the upcoming Games section aren't counted. 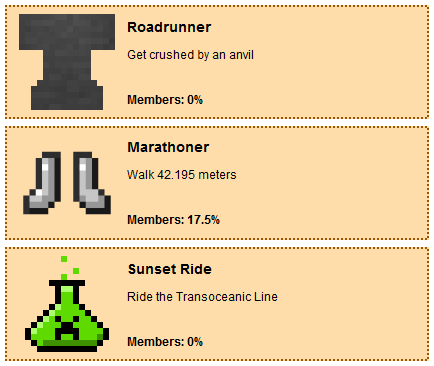 What happened between then and now?

This section will explain what happened and changed in the past year for our more veteran players.

As a reminder, the achievements system used to have 150 targets and was taken down when the Laurasia (then-Survival) server was upgraded to 1.8. What was meant to take a few weeks eventually turned into a rather difficult upgrade process due to various unexpected developments:

- Name changes needed me to port everything to be UUID-based instead of player name-based, and the plugin I was using at the time to track the player stats wasn't compatible with that. As such, I had to pick a new plugin, which stores its data in a completely different format, and adapt to that.

- Internal MC stats aren't reliable. I initially wanted to base the new system on the internal stats tracking system by Mojang, and made some decent headway in that direction, until I realized that every time a player first connected post-1.8, the server would actively WIPE their data instead of migrating it over to a new format. That was enough to tell me I needed to use something more reliable instead, something that I could control.

- Multiple servers are now available, with Rodinia and Gondwana being run separately. I wanted to make sure that players could also score achievements from these locations, as limiting the goals to Laurasia would probably make some players feel like they had no other option if they wanted to build AND earn achievements.


A change of plugins means some reorganization, too. Since the data format is different, I was forced to reset everyone's numbers to 0 on most goals. Only the number of visits done were kept (such as, say, the number of lighthouses found). I retained which achievements were earned in the past, though, so you won't need to do things you already completed succesfully before the system was put to sleep. You can already confirm this from your forum profile. Additionally, I've granted for bragging rights a special forum badge to the 7 players who managed to top the leaderboard before the reset!

I removed 50 achievements from the previous set, as many of the statistics that I tracked are no longer available under the new system. I'm planning to return some of these at a later date through other means. This unfortunately means that we're missing some of the classics (Smitten By God - Take damage from lightning) that I know you loved to work on!

My goal is to add another 50 targets once we've upgraded to 1.9, with a mix of previously seen targets and brand new ones focusing on the newer content. There's no specific deadline for this, especially since no release date for 1.9 is known yet.

Until now, have fun earning those achievements, or thinking about what new challenges will be coming to the future!
[Follow the discussion!]
<< Previous | News archive | Next >>