Seven people decided to ride the rails to the new hangar and build an entry in the trains contests! Both Exodio and Toad_ volunteered as judges and scored each entry from 1 to 10, commenting on the build quality and their appreciation for the various details included. Here is the list of the winners along with what they won!


The full list of entries along with comments are available, as always, on the results page. The hangar is now opened to everyone who wants to build a second train element, or newcomers looking to make their own addition! 2 indoor and 3 outdoor spots are still available. 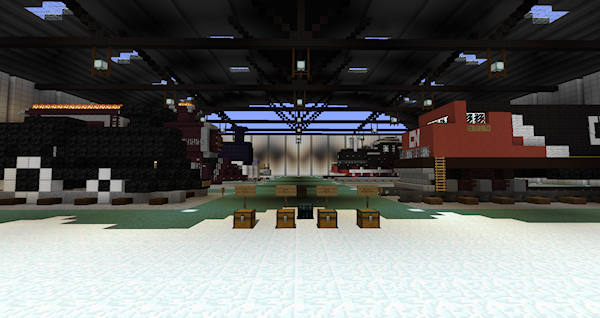 Thank you to everyone who participate, and to Skreelink for coming up with the idea and running the entire thing!
[Follow the discussion!]

The train building contest has now reached its midway point! There are 3 indoor spots and 4 outdoor ones left if you want to participate. The available space is relatively small, so you still have plenty of time to design and build something!

The prizes have been determined, but will remain secret until the winners are announced. All I've been allowed to tell you is that they consist of in-game items that are, of course, related to trains! There are three prizes for the top winners, plus one package for a random participant.

Skreelink is now looking for two judges to score the various entries that are being built. If you're not participating and would like to give him a hand, please contact him directly!

Your opinion about the forums!

I just opened a topic on the forums asking about your opinion on them. They offer many features, but I feel like they're being underused and not reaching their full potential. I've got some upgrades in the planning stages, and I'd like you to tell me what direction I should take next. Click on the next link for more information!

Please give your feedback!

If you're looking for a new building challenge, Skreelink has one ready for you! You are formally invited to join us in a competition to build a favorite of many of us from the Creeper's Lab: TRAINS.

Your mission, should you choose to accept it, consists of building a train or a train component. The exact type of what you build is up to you: train engines, cars, cabooses and so on are all welcome, along with similar vehicles like streetcars. However, it has to be something realistic in design, like you could find somewhere in the real world. If it belongs on rails, it's most likely fine!

Skree has built a large hangar to house your creations, while a few outside plots in front are available as well. To visit this new location, from Central, use the overworld Western Line to the first branch (third stop). Once there, switch to the side line and disembark at the first stop! Alternatively, from Nether Central, use the West line, get out of the first substation (Alucard), then select the Canada line.

There are only 10 inside lots and 4 outside ones available. Once they're gone, they're gone, so you'll want to hurry up to reserve your spot! Please put a sign somewhere on your lot or its direct border so we can tell which entry is yours. Each lot is 12 blocks wide, 40 blocks long and 14 blocks high. You can't dig up the ground.

This new contest will run for about two weeks, starting from now. You have until Tuesday, August 25th at 23:59:59 Eastern time to complete your entry. It will then be judged in the following days, and the results will be posted here later on.

Skreelink is still working on the full set of prizes, which will be revealed later!


Good luck to everyone who decides to enter!
[Follow the discussion!]

Several people spent up to a month designing and building sand castles, and it's now time to announce the results! HimochiKouen, MediaKlepto and myself went from entry to entry, judging them on a score from 1 to 10 to determine who was best at following the give theme and designing an attractive castle. Without further wait, the winners:

Congratulations to all! As described previously, doorgunnerjgs won a diamond helmet suitable for underwater work and movement. You will find it in your mailbox in Nether Central. door also scored 50 Merit Points, while Skreelink and Exodio earned 30 and 15 respectively. This gives them a chance to earn some fancy prizes down the line, which will be detailed later! All contest entries and results can be viewed on the results page.

As a reminder, you can check your points score at any time on the forums or by typing /points in game. Additionally, you can track your position compared to the others on the brand new Merit Points leaderboard! Contestants all earn a point for trying, with will be given to them soon.

A big round of applause to everyone who participated (or tried!) and helped make this new concept of having a seasonal map a success! The next seasonal map will be an Halloween special in October! Stay tuned!