As we near the "Holiday Season" we're often bombarded by one in particular... You may already be seeing the merchandise out already, conveniently skipping two other holidays!

Here over in Miranda, the Super C decided to fight the major corporate greed by celebrating HALLOWEEN instead! That's right, we're giving October a bit of love.

Okay? What exactly is involved? Well, for the entire month of October, Contractor's Evening will be enabled. That's October 1st through Halloween, October 31st. Allowing you plenty of time to get any major builds (hopefully some awesome Halloween themed builds) accomplished in Miranda.

Maybe the community can get together and add a new town? Something creeeepy? :)

For those who are new, or need a refresher: Miranda is an affiliate server made for larger scale builds or those who bemoan gathering resources. There's a store at spawn, that you can gain access with a single iron ingot to give you stacks of all major building blocks, as much as you can carry. So you don't have to spend hours gathering materials for your build. Plus, Keep Inventory is on full time, so you don't have to worry about losing it all if you happen to fall off your build.

Contractor's Evening (Not to be confused with Events Night on the sLab)is usually on Wednesdays at 6PM EST. During it, a shrine at spawn is active. One push of the button at said shrine will grant you the power of flight until you tap the button again, or disconnect.

tl;dr
Contractor's Evening will be active October 1st through October 31s to celebrate Halloween and kick Christmas in the head.

Apocalypse Event Release: 5.5
For the previous five event releases of this series, please click the following links:
Wychwood | Snowhead | Shattered Sands | Shoals of the Departed | New Game+ Releases
This event release is a bit.. strange. Born from the mass of updates needed due to the 1.14 update, we've had to comb through all the existing science areas, items, and mobs; and decided to use this opportunity to rebalance and fix some of the earlier things while we were at it!

First and foremost, the Science forum thread has had some major updates across all of it's areas, including an armor-rating scale of each area, unified directions for all areas, and the best of what can be obtained at each.
The Moosemart section has also been updated with all the new/improved villagers and updated layout.

Secondly, everyone who'se obtained any sort of science items pre-1.14 (Everyone remember that raffle event from 2018~?) should direct their eyes to this link here. This is a changelog of all the items that have been edited during this entire debacle. What's this Post Office it mentions, you ask? WELL...

Creeper Citadel: Post Office
First, a history lesson. Back when Laurasia's Nether Central station was in major usage, there was a handy dandy Post Office built into it, for player to setup mailboxes, and other players could leave them things without them actually being around! With the advent of Gates and the new Grand Central Station, Nether Central's usage died out, and the Post Office was moved to Rodinia; which didn't garner as much use as it had, due to most people not moving around on Rodinia.
Why's all this matter, you ask? Because the Post Office has officially been moved to the Creeper Citadel! That place everyone goes to! Anyone that had a box either in the Rodinia or Nether Central version has had it moved to the new location- if you haven't set a mailbox up yet, go do so!
Ontop of thise, the basement of the Post Office has been designated as a gathering location for Science items from the changelog that need to be updated. Have some stuff you need updated or repaired? Go have a visit!

Lost Woods: Hard Mode Shrines
Next on our list of updates, the Hard Mode Shrines within the Lost Woods are now live and kicking. Our recomendation is to run these -after- having run the Shoals of the Departed, and on an Events Night, but you do you!

New Regenerating Areas: Pandora and Camirus
Following this trend of new stuff, we have two new regenerating areas: Pandora, a Flower Forest, and Camirus, a re-runable village raid!
Details for both can be found on the Science forum post, as well as how to reach them. Need flowers enmasse or want to fight a Village Raid? Head on over!

The End: Laurasia Dragon Priests
Next up in the new-content category, four new Dragon Priests have been hidden around the overworld of Laurasia. Find them all, collect their heads, and bring them to the Happy Mask Salesman to obtain the key to the mother of all Ender Dragon fights. Be warned, you'll never have KeepInventory out here!

Science Updates
Last but definitley not least, on the topic of the 1.14 Science updates, we are happy to announce that all Challenge Areas are fully operational once again, and open for business!

Since the last set of areas to be released didn't get too much attention before 1.14 shut everything down, take a gander over at the Last Event Release if you missed it!
[Follow the discussion!]

As many of you already noticed, a big challenge coming from Minecraft 1.14 is a lack of performance: slowdowns are fairly common. This isn't tied to our hardware, as the game itself is known for running slow in multiple situations.

I've done some setting tuning on Laurasia in the past 10 days to try to improve the situation, and the results so far have been positive. I've now extended this to the other servers, hopefully giving us a smoother gameplay experience!

Challenge: Blow up some steam!

The September challenge is now live! This month, we're doing something a bit different: a special map is available, where your mission is to destroy as much of it as you can! You've read that right - grab your best griefing tools and go nuts on an established place. We want this done properly, though, and not recklessly, because we care. If you accidentally die, you'll be kicked off the world for a full week, following the UHC rules. Workers safety first! To ensure that the spawn point remains usable, a 50x50 area around it is protected.

Since tracking exactly who deals the most damage is difficult, we won't even try: anyone registered who enters Kenorland this month will get 5 Merit Points. 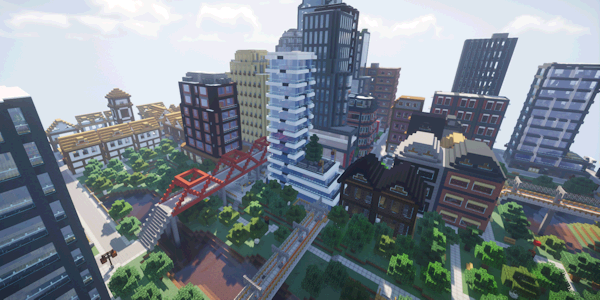 In Hunter's Lodge updates, a new raid boss has risen: you'll be fighting none other than a Rancor! Your prize, if you manage to defeat it, will consist of Swamp Shards. These can be exchanged to obtain the Woodsman's Axe, which is enchanted with an unbreakable status.
[Follow the discussion!]
<< Previous | News archive | Next >>