It's been a while since we've had a friendly competition, how about trying something new?

You're all invited this Saturday for boat racing in Central! I've designed a new racetrack using Central's canals, which now form a loop. Put your navigation skills to the test, and see who can come up ahead of the pack!

A few quick rules:
- The first player to complete 3 loops wins.
- You must ride on boats, not swim! If you fall off, quickly jump back in.
- No attacking other players' boats!

Each participant has to bring in two diamonds as an entry cost. The winner of the race will win the pot, along with 10 Merit Points! Second and third place runners will get 6 and 3 points respectively.

The race will begin at 10pm Eastern time this Saturday, in Central, and you're all invited to join us for some fun! You can show up starting from 9 if you want to discover the track or practice on it ahead of time. 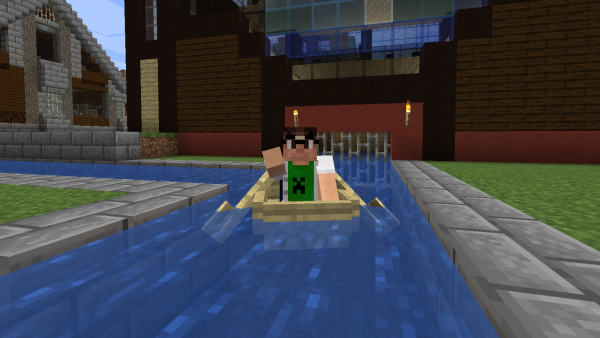 For the previous two event releases of this series, please click the following links: Wychwood | Snowhead


It's about that time again; time for another one of the Horsemen Event areas to go live, and this one is quite the addition.

Located in the desert region around War's castle in the west, this event area covers the smallest surface area out of them all- yet contains more content then both the previous events combined!
The desert surface itself is its own battleground, teaming with endlessly spawning Husks alongside War's own personal troops, the Golden Army.
War's castle can be accessed like the rest, through the warps at the Citadel or the top of the Keep of Time during events night, or via the Nether using the first floor of the Salad Facts station on the Western Mainline.

The main attraction here is the massive mine located beneath the castle, called 'The Heart'. The mine has been split into 5 distinct areas; the 4 corners have been taken over by different factions of different God followings, while the center remains neutral- as it contains the access the warden of the mine, the avatar Telos.
Why do I care about any of this, you ask? WELL, let me tell you a tale. This dungeon allows you to grind for, and assemble, four different armor sets that surpass diamond armor! Their enchantments, as well as armor rating/toughness exceed what is naturally available to diamond. Along with that, the armor is unbreakable - it will never take damage! Each of the four sets have their own advantages and drawbacks, so choose wisely; or go nuts and aim for all four!
Along with these amazing armor sets, as well as a wealth of other items available, four weapons can also be discovered and awakened that are said to have been used by the gods themselves! In other words, they're the most powerful weapons currently available across the game! (Within reason, of course).

Now you may be thinking, "...what's the catch." And you'd be right! These armors and weapons will be no simple task to gather for and create. Such is their challenge, that we're actually providing a quick guide here on how to obtain them (And something more detailed in the future.):

1. There are 4 main items needed to be obtained from the dungeon in order to gain these legendary items: Dormant Armor Fragments, "God" Crests, Anima, and the Dormant versions of the four weapons.

2. God Crests are the easiest of the 4 to get, and naturally that means you'll need the most of them. A litany of mobs occupies the four corners of the mine, and each can be seen holding the crest of their respective gods. Slaughter them in great numbers, and you'll have all the crests you could ever want! (There's a few other uses for rests, so don't shy away from any extras if you run into them!)

3. Among these crest-dropping mobs will be another type of mob, a 'door guardian' that holds a key to a further room in each area. These rooms hold the Generals of the factions and are effectively miniboss fights. On defeat, these minibosses will (always) drop 2 Dormant Armor Fragments, which can be traded in fair numbers for Dormant pieces of armor at the dwarf Brok, in the main area.

4. Along with the Dormant Armor fragments, the Generals have a chance to drop 'Shards' also named after their patron gods. One shard from each area can be combined at 'The Watcher' to form a Priw Mundi carving, which allow access into the World Tree at the center of the mine (Brok can also craft these shards using Dormant Armor Fragments and God Crests). Beyond that, you will find the warden Telos waiting for you. He is the main (and only) source of Anima within the dungeon, as well as how you obtain the Dormant Weapons
Be warned, he will be the hardest fight yet!

5. Anima can then be refined at the dwarf Sindri, along with God Crests, to a Refined Anima in the flavor of whichever god the crests belonged to. This Refined Anima is then used to awaken the Dormant Weapons, or the Dormant Armor Chestplate of that same god. The remainder of the armor pieces are completed directly with crests- this final step for either item is performed at that god's 'Chosen', accessible via the "Island of the Chosen' warp in the mine's center area.

There's no hiding that it's quite a bit of work to get these treasures, but, as you'll see for yourself, they're highly worth it. If you're ever lost on what to do or where you are in the creation process, feel free to ask any of the Horsemen- or, check the villagers themselves, and they can more or less guide you on what they want for what pieces.

In addition to the mine, there's also another few areas within the desert... one in specific is worth noting - The Fight Kiln! This area lets you fight against, and collect rewards from, endless waves of TokHaar golems- which you can read more about in the new chapters for this event! Chapter 4 and Chapter 5
There's a fair few prizes you can collect from their NPC, some that could even help you out in the mine! Be sure to take a look!

Hunter's Lodge
The Hunter's Lodge has also been updated with a new raidboss for the month, retiring Santa and the two guests from the Overlook Hotel. and this is one taaall order! Stop by and take a look for yourself!

UHC
New entries are being prepared to be added to the rotation of challenges. For this month, you get a new UHC world, with a custom map featuring a large mesa, high cliffs and deep valleys. Vegetation is scarce but plentiful enough to supply you! Good luck!
[Follow the discussion!]
<< Previous | News archive | Next >>