We're getting even closer to the end of the year, and now our week of preparations leading up to the giveaway has also concluded.

We had a great turn-out of 33 players show up this week, and as promised we whipped up even more prize packages to hand out. Some players have already received their winnings, but we've still got plenty to go around for those of you who missed out on the chance to grab them tonight. Feel free to poke MediaKlepto or SorathePumpking in-game or on Discord to catch up with us when we're around to snag a shulker full of goodies.

As a special added bonus, we also conducted a super secret raffle drawing alongside the giveaway, where a single lucky player would receive an as of yet unreleased set of Golden Warpriest Armor from an upcoming Horseman Challenge area. The blessing of the Squidgods have fallen on BiGsTiVo this time, so congrats to him!

Thanks to everyone who joined us this week, and here's to hoping for another great year of mining and crafting!

The images gallery is back online!

A casualty of the dedicated server move two months ago was the images gallery featuring various views of the player builds. After having to re-upload the images one by one, that gallery is now back online!

Once in a while, I generate a render of a view from the server, either of a specific player build, a natural structure, a town, or more. I brought my rendering setup back online in October and have resumed creating new images in the meantime. You can visit the gallery today and find eight new renders that weren't there before, along with all previously available ones.

If there's something you'd like to see in there, I always accept requests, so get in touch with me or leave a reply to this post!

2018 is finally drawing to a close, and what better way to celebrate than with a giveaway! This isn't a raffle in our typical style; this time everyone wins!

We've got a huge backlog of confiscated materials to dole out, as well as some science-y items to give you a headstart on the Lost Woods, the Hunter's Lodge, the End Challenge, Wychwood, and Snowhead. Prizes include materials like diamonds and lapis, collectibles like skulls, armor pieces and ammo from the various challenge areas, and shards for the different merchants. There might even be some cheeky currently unreleased items hiding in some of the loot, so it's well-within everyone's interest to participate!

The login period for this giveaway runs from 12:00AM (midnight) Sunday December 23rd to 11:59PM Saturday December 29th when drawings will be held. Every single player who logs in to the Creeper's Lab Lobby or any world accessible from it during this timeframe will win 1 of 25 different packages, randomly distributed at the end of the week. If more than 25 players are eligible, we'll either create additional packages or double-up the ones we have. No one misses out as long as they've shown up to be entered into the running!

As with all things in life, there are however a few rules:

- 1-minute minimum attendance: Stay logged in for at least 1 minute. You love us at least that much, right?
- 1 win per player: Players with multiple eligible accounts will only receive 1 prize.
- Participants much be registered: Visitors are not eligible.
- Prizes are final: Feel free to trade other players for some of their loot, but rerolls are not an option.

Good luck to everyone, and here's to another year of mining and crafting, and many more~

Many of you have heard of the newest batch of challenges to be added, from the Lost Wood to the Horsemen events. Some have already tried them, but others might have been intimidated by the potential difficulty. As such, how about getting some assistance in discovering these?

Itachi has graciously offered to bring groups of players through the Lost Woods, our Zelda-like adventure challenge. This is your chance to be guided through the experience, learning how these activities should be handled while earning various items by defeating enemies and completing section of the map! Build up your equipment!

To give you an extra hand, Events Night will be triggered for the duration, preventing you from losing your equipment on death. This will begin this Saturday, at noon Eastern time, and continue through the full weekend. This is a great opportunity to try something new in safer conditions than you might otherwise have, so be sure to show up for some fun!

Following up on yesterday's news about cards, Sphenicus has updated our Christmas resource pack! This brings it to the 1.13 data format, along with some new content and improvements. You can download it from the resource packs page!

Unlike before, this is now an add-on. That is, you want to install the regular pack, then add this one with a higher priority so you get the best results.

Get your Christmas card, 2018 edition!

It's December already, and you know what that means, right? Christmas cards!! 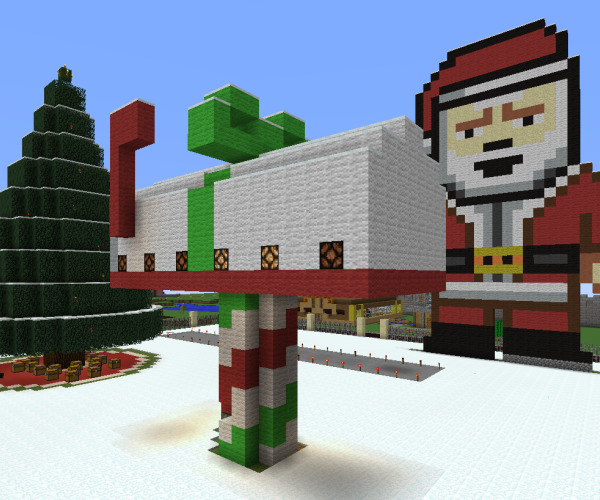 For those new to this, every year I send out a holidays card in the mail directly to you, featuring a scene from the server, and its free! All you need to do is submit your physical mailing address, wait, and you'll get one around the holidays!

You have two ways to claim yours: in Laurasia, visit the Seasonal Park (in Central, heading North, using the Residential Line) and find the giant mailbox represented above. Get a book, write your name and address, submit it, and you're done! Alternatively, if you don't want to go in-game, you can use this special page tied to the forums.

I clear the list of submitted addresses every year, so if you want one, please send your address anew - I didn't keep it! I still have limited quantities of the cards from 2014 to 2017 available. If you want one because you didn't claim it before (or you simply lost yours), please specify a year when you put your address.
[Follow the discussion!]

For the first release of this event series, see: here.

What better way to start off the snowy month of December than with a new Horsemen event! And it just so happens, this one is located out in the snowy reaches of the East, the Castle of Conquest! Specifically, the areas around it: Snowhead. The castle and it's grounds can be reached much like the others: During events night using the warp at the top of the Keep of Time, the warps in the Citadel, or via it's nether portal, linked out of UnknownEntity's Divine Trans Hub.

This event focuses on the Temple of Ancients, whose entrance can be found at the end of the frozen river that runs next to the castle. This event is designed in the flavor of old-school MMO grind dungeons, where you defeat waves of opponents to collect enough drops for a greater prize.

In this release, we start to more heavily dive into the building lore, which you can read more about on this page. Chapters 2 and 3 are now available! Of new loot, the Warpriest armors are now available; slightly weaker in defensive measure then the Barrows armors (while still as strong as conventional armor), with one major perk: these armors are unbreakable! Also available to create are the Godswords, powerful new swords specialized after each of the four Gods involved in the temple. For further details on all the items available, please check the newly added areas in the Cavern of Science, or directly from their villagers on the second floor of Moosemart, and of course at the event site itself, at the village of Naragun. And of course, if you have questions, throw them at your nearest Horsemen!

Part of what this (and the last) event added are these stands for Lorebooks; written books that add more insight into the areas they describe and are even collectible in a series of sorts. There are two kinds of books: the Apocalyptic books spread out across the world, at the locations they describe (released along with their corresponding events), and the Archive books, which are added to the stands at the Citadel once the next event has been released. You can identify which books have been filled out at the Citadel by the creeper heads posted on the stands (See pictured above.) Finding all the Apocalyptic books may even be an achievement in of themselves... if you get my drift!

In addition to the Lorebooks and the new additions in the Citadel's two main areas, Conquest's Quest Board is now open with another set of Horsemen Quests; take a look if you're out there! See you again on February 1st for the next event release!

This month is a special month for the Lodge, where two raid bosses are available! This month, Santa and his minions are looking for a fight, and elsewhere, the boss of the Overlook Hotel is out for blood. Make sure you make your way out and give these a go! The Raid boss button will spawn both these groups, so make sure you hunt well!

A new UHC world is available for the month of December. It’s getting cold out there, so please be careful to keep warm… or not to slip and fall off!
[Follow the discussion!]
<< Previous | News archive | Next >>