Midpoint of the Lemuria building contest!

Sora and I would like to take a moment to remind everyone that the Lemuria building contest has reached its midpoint! You didn't get started yet? That's not a problem since there are still two months to go!

As a summary, there are three areas opened for building right now:

Halfway: forest theme - a tree has to be involved
West Halfway: Nether theme - lava and/or fire must be included
Minetropolis: city theme - tall entries are expected

Multiple entries are not only allowed, but encouraged in each location; so don't hesitate to make more than one build, even if you don't think a given idea is a winner! You have until Halloween, on the 31st of October, to get everything done. Multiple prizes are involved, including cash rewards and Merit Points.

As a reminder, here is the full set of rules and details for this contest.

Best of luck to everyone!

Pop into a world of wonder! I have created a Feed The Beast server for anyone who would like to add a little spice to Minecraft. It uses a modpack roughly based off Direwolf20 1.10.2. You can use the Twitch desktop app for easy launching and load the modpack
https://nofile.io/f/UESYRUTYbhb/PrimaPack3.2-1.12.1.zip
profile to be able to join. And update to throw in your mod folder if you've played before. https://nofile.io/f/zNVOeCEquj9/New.zip If anyone needs help getting their client setup just give me a shout and I can lend a hand. Server Address: Altera.zonexus.net

All servers have been successfully updated to to Minecraft 1.12.1! You'll need to follow suit in order to go anywhere beyond the lobby.

Mojang is expected to release Minecraft 1.12.1 tomorrow to fix some issues. This new version is not compatible with our current 1.12, so don't update right away to continue playing with us!

This month's UHC map is a bit different than the previous ones: I've decided to incorporate the Race Away component from last June's competition for a mixed challenge of hardcore survival and running!

As in the last race, the Nether has been completely disabled. As a result, only two of the normal UHC targets are reachable, each worth 5 Merit Points:
- Crafting a bookshelf
- Crafting an enchantment table

The additional goal this time around will be to make the most distance as possible from the starting point alongside the X axis. The top three players who reach the highest X value will earn an additional 10 points each. Any deaths will send you back to the beginning AND kick you out of Kenorland for 7 days, so I suggest you thread very carefully. This world will show you no mercy! Whatever highest X value you reach during the month will be used, even if you die and fall behind.

A strict world border has been put in place to keep you between -200 and 200 on the Z axis. Trying to cross that threshold will bounce you back a few blocks, potentially landing you in a precarious position. I suggest you keep that in mind.

Oh, and by the way. The floor is lava. 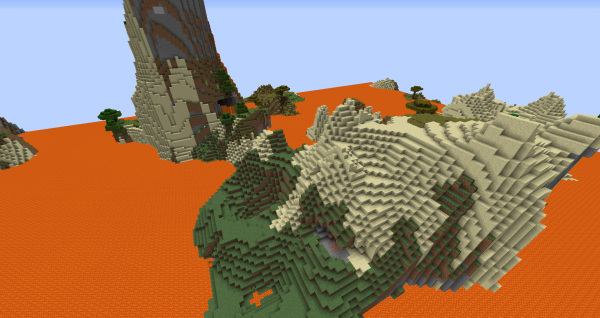 Miranda's first contest has come to a close, and sadly it was a mediocre turnout, however all participants will be recognized if able. There was a grand total of four builds, only one of which qualified in the 3 prize categories. I am thankful to all those who participated.

First a look at the winner! A simple, yet 1:1 scale Concorde jet! It looks a bit plain, but that's how the actual plane looks. A fancy 20 of these were made, making them a not too common plane.
Congrats Doctacosa! While a solid and detailed build, it was two combat aircraft instead of one (combat was team + over runway). It was also not properly labeled, had to find a sign on the runway, without a name. Flight-lights were the rule for airborne craft. Shame. This is a very interesting build, and amazing use of materials. Looks like an alien force is about to invade. However, I have absolutely no idea who built it! No identification was found, not even a sign to check registration, same airborne identification applies. Only build in the category, would have been the winner. Shame. The only entry, again unlabeled. The only indication was being able to identify a registered sign on the plane (GingeKoda) and I can only think of one person to be a partner here, Coneva. This is a very neat take on the team battle build rule, I love the use of material and details. Well done both of you.

Congrats to our winner, and thank you to the other builders. Hopefully future contests will have a better outcome. For now, keep to the skies.