Ten years special! Which of our additions over time have been the best ones?

It's time for a new building contest! I'll let showrunner SorathePumpking describe the goals and rules to you.

Well hey all you sacks of flesh and liquids, it's time for another building contest~
This one will be a bit different from the past, in that we want you to make more then one entry. Hell, you pretty much have to!
This way, everyone has as much of an equal shot at prizes as the best builders on the server, and with 4 WHOLE MONTHS to build, time won't be an issue! Naturally, with the ability to enter multiple times, we're running this thing on strict guidelines.

BE SURE TO READ THIS ENTIRE POST, TWICE IF YOU HAVE TO. YOU'VE BEEN WARNED~

This will be taking place in the magical socialist land of Lemuria; the deep, dark sanctuary of the Pumpkin army in the south of the world. The task will be to buildup the cities of Minetropolis, Halfway, and West Halfway, according to their existing themes; with the goal of filling up all the existing contest plots (Only one at a time, of course. Can't be too hasty).

The contest technically starts today, June 19th, with a 1-week period for gathering materials before anyone can start building. Feel free to look over the contest areas, pick your first plots ahead of time, and get a general feel for what you'll be doing!

Minetropolis, Halfway, and West Halfway can be reached by taking the 'Southern Line' rail from central, or taking the South Mainline nether rail, to substation 'Eden Bay'. Just follow the Pumpkins to the Lemuria Nether Hub~
Full contest details below:- read them to the T, each line will matter!

Contest Description:
Build contest involving multiple entries under 3 zones: West Halfway with a Nether theme, Halfway with a Forest theme, Minetropolis with a city theme. The objective will be to create as many complete entries as possible, to gain as many points as possible.

Each Entry Requirements:
-Multiple entries allowed, and are encouraged.
-Free plots are designated by a fenced-in area, with a sign stating 'Unclaimed'. Refer to the following link for the general area of all contest plots: http://imgur.com/a/CCv6g
--If an area lacks a sign stating 'unclaimed' or 'claimed by X player', the area is not part of the contest. Builds found outside contest plots will be removed.
-Can only claim one plot at a time, and can only move onto a new plot when the first claimed plot has been declared 'finished for judging', at which time the plot is locked from editing - Plot must meet all criteria to be declared finished, which can be determined by contacting a judge to verify/lock the plot.
-Each entry must be fully furnished.
--Additional plots cannot be claimed by a player's alt.
-Must be 'visibly complete' to be announced complete (No obvious signs of continued construction)
-Each entry must fit within the plot bounds, within the boundaries of the existing fences (Fences will be removed at the end of the contest, and cannot be occupied until after the contest)
-Halfway builds must involve a tree in some aspect of the build
-West Halfway builds must involve fire/lava in some aspect of the build
-Minetropolis Skyscraper lots are limited to 3 per participant
-(While not a requirement, it is highly advised to do minimal work underground, as large cavities of earth are sporatically missing, and multiple tunnels run the vicinity of all areas. Suggestion is no more than 4 blocks down.)
-Each entry must be built to the scale of the player
-Each entry cannot use materials from the ban lists for the location (Halfway: No Obsidian, netherbrick, netherrack, netherwart, netherwart blocks, soulsand, fire or lava. West Halfway: No Oak/Birch logs or associated wood products ((Oak/birch planks, fences, ect)), no leaves or water. Minetropolis: No wooden doors or wooden door varients.)
-Terrain on each entry must still blend with surrounding plots
-For Skyscrapers only, existing builds in other locations can be utilized and moved to a plot within the city; as long as the building fits within the size of the given plots, meets the height restrictions, and fulfills all contest requirements once declared 'finished'.
-Each entry must be within reasonable size for each area; builds within Halfway and West halfway must not exceed 25 blocks tall (from the ground's surface), while entries in Minetropolis must meet a minimum height of Y=120, but not surpass Y=165.
--Any entry left idle (while unfinished) for a period of 3 weeks or more is subject to be removed in the event that the area has run out of plots, or the contest has ended. All materials on said plot are forfeit in these situations.
--We (the staff judges) do reserve the right to remove any particular entry for any reasons that may violate server or contest rules.

Judging Parameters:
Judging will take place on November 1st 2017 and onward, or after all (Residential) plots have been declared finished, and will be rated on a scale of 1-10 for the following fields:.
-Attention to Theme
-Overall Asethetical apperance
-creativity of available materials
-adherence to entry requirements
-scale correctness
-use of existing terrain in build
--Extra points may be awarded in each category on a Skyscraper entry (On a scale of 1-20).
At the end of the contest, the players with the most points gained across all areas, wins.

An additonal prize will be provided to all involved participants if all plots within the two Residential districts are filled before/as of the end of the contest.

Judge Panel:
Each judge will be able to enter a single build in any category, which will be voted on by the server community on the above specifications. (Judges can build additional entries toward the 100% completion reward, but only one will count for a reward)

Judge Rewards:
Top 3 placing judges will receive a free Patreon pledge to Creeperslab provided by Sora, of the $5 pledge level. (Other means of award will be worked out of the winner has already pledged or donated) 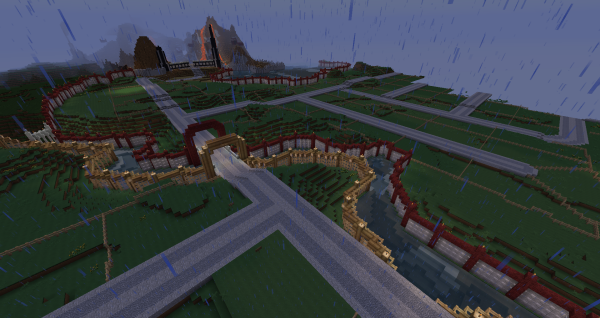