A few people have asked me about the results of the Monopoly game event, then I realized that I never did post them. My mistake!

Up to 12 players showed up to participate in the cutthroat world of finance, leading to an initial problem with cash flow. The Central Bank printed more money (hello inflation!), then the game got underway. After a few hours of gameplay, and with the hour getting rather late, we agreed to count each participant's cash and properties to determine the winners. Ultimately, Coneva, RoxastheAwesome and axe_y were the top three winners! They have all earned some diamonds from the entry fee that each participant had to provide.

Thanks to everyone who joined in for this special night, Itachi for efficiently running the bank and keeping the game running smoothly, and of course to Toad_ for building the board itself and coordinating the event!

This is an idea that has been thrown around for a while, and I decided to indulge you people with the introduction of UHC mode!

But what is UHC mode, some of you might ask? It's simple: it's hardcore Minecraft, on a server, with natural health regeneration disabled. Your main challenge in this case is to manage your health, since even eating won't fill it back up. Your only options are to brew health potions, craft Golden Apples, or build a regen beacon. Good luck with that last one!

To increase the challenge, PvP is enabled, there are no protections done besides the spawn point, raiding and griefing ARE allowed, and mobs WILL cause damage to the environment. If you forgot how bad creeper explosions could get, you're about to get a strong reminder!

Once you die, you'll automatically be set to Spectator mode. That will allow you to see how the rest of the game is going, but that's it for you until the next game cycle. The current goal is to use a new map every month. Some will use Minecraft's default generator, some will be pre-made maps, other months might see the return of classics... In any case, maps will get replaced, so don't build anything fancy with the expectation to keep it: we're got the survival servers for that!

As this is new, there will likely be adjustements down the road. For example, I'm considering allowing people to resume playing after a set cooldown period, giving them more opportunities to explore and fight before the next cycle.

One extra thing I'm doing is something different: visitors ARE allowed to join UHC without registering, giving them a starting gameplay option. To help keep everything under control, the automatic word filter previously used in TNT Tag will be extended over the UHC world as well.

UHC mode is accessible from the lobby, under the UHC label (where World 8 used to stand); the world name is Kenorland. To exit that, just /lobby out at any time. Various sections of the website have been updated to include this new gameplay option

Multiple players have asked over the years for a more challenging option, and this is my answer to you. Now, the ball is in your camp!


The seasonal event itself

I'm adding UHC as a permanent mode on the Creeper's Lab. To launch it properly, though, it'll double as September's seasonal event!

The current world is 2048 x 2048 in size, custom-drawn and features a few different biomes. Explore, find some original vista (or dive deep underground), and find a way to survive past your first night!

This event begins NOW and will run over September 30th at 23:59:59, Eastern time. A new UHC map will be introduced after that, although that won't be part of this seasonal event.

There's no hard goal this time around, besides surviving... which will be a challenge in itself! Everyone who joins the UHC server will earn one Merit Point for showing up. Additionally, all can earn 10 Merit Points for reaching each of the following targets, as tracked through the vanilla Minecraft achievements:
- Local Brewery: Brew a potion
- Enchanter: Build an enchantment table

Note that some changes are coming to the Merit Points system, will are still being worked out. Details will be available later on.

All rewards only apply to players who have registered before the end of September.


That's it! Good luck, everyone! 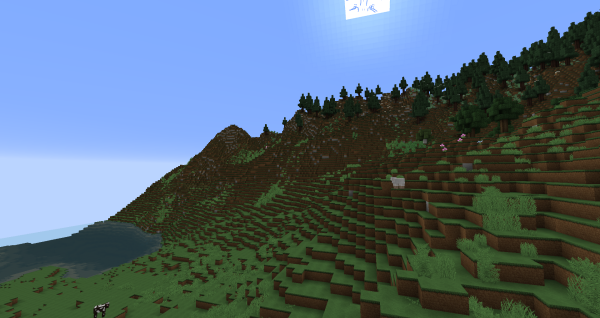 UPDATE: Ores and caverns have been seeded through the world, but only about 50% of the area has been covered. If your current location doesn't have any, go deeper or head somewhere else!
[Follow the discussion!]

Playing a game within a game can be fun, and it's time to do just that!

Toad_ has finished building his giant Monopoly board with the help of a few people, and he's inviting everyone to come play! This game will take place this Saturday, the 10th, during Events Night. Please make your way to the board before 10pm so that we can get started quickly! On Saturday nights, the Monopoly board can be easily reached through the End of Time, in the Additional Attractions section.

There is an entry price of two diamonds per player. The winner of the game will earn at least some of these, and there are rumors that more prizes will be made available to the participants as well!

All come to play, try to become rich, likely fail, but hopefully have fun in the process. See you then! 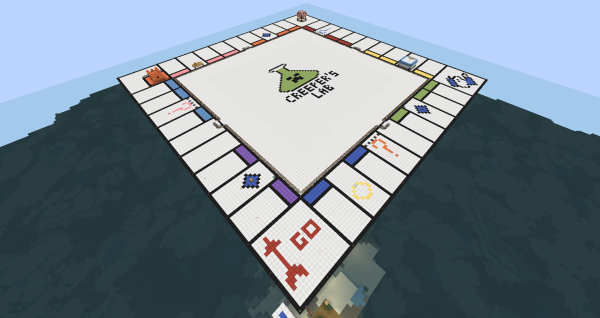 It's about time for the next event, and a new month just started, which makes this the right moment...

... except that what I have in mind still needs some more polish, so I've got to delay the launch until later. This is definitely happening in September, though, so I'm asking you for a bit of patience while I work things out. I hope you'll agree with me later on that it'll have been worth the wait!