Mojang published today the first set of fixes for the current Minecraft version under the 1.9.1 name, quickly followed with 1.9.2 to fix another issue. However, both of these are not compatible with version 1.9 of the server, so be sure not to upgrade for now in order to continue to play with us!

Survival updated to 1.9, come play with us!

All survival servers have been successfully upgraded to 1.9, so please upgrade your game version and join us for new adventures! There are no remaining bugs as far as I can tell; please tell anyone on the staff team if something appears to be out of place. Also, I invite you to read the following as some important things are worth noting.

At this point, DynMap is unstable and responsible for the mob freezing effect you might have noticed in Nena. As such, I've temporary disabled it until a new version is available, which I expect to happen soon. Until then, all server maps are still available at their given URLs, with one core difference: they're fully static, so player positions and block changes are not reflected yet. Updates will resume after the issues are taken care of.

Also broken as of this writing is FastCraft, our quick crafting plugin, so it has been removed until/when a new release brings it back in working order.

An extra little touch being lost is KillStats, which allows killed player heads to be dropped during PvP matches, along with kill streak announcements. I already have something under development to replace part of its functionality; that will be available at a later time.


How the End is handled

Here's what I wrote about the End previously:
"A question that has come up often is how the End will be managed now that there will be more to explore on that front. Right now, the End is reset every 24 hours so that everyone gets a chance at fighting the Enderdragon. At the same time, it's very possible that people will want to make permanent structures on the new lands that will be available. Even if the dragon can be respawned, I still want people to get a chance to experience the battle without any interferences.

As such, the End on Laurasia will keep its current status; that is, being automatically reset 24 hours after the dragon has been killed. To allow further exploration and permanent builds, Rodinia's End will be the one to remain as-is. That way, both options will be available!"

As our testing wraps up, Nena is being retired. My thanks go to those of you who played there and helped narrow down some of the bugs!

Skreelink is using the opportunity to expand Miranda's borders to allow the generation of new elements like igloos. The world has now doubled in size!


Best of luck on your new adventures!

Today I introduce a new world to the players of Miranda that should aide in your quest for building grand things. This world is accessible to certain players who have participated and built things in Miranda, which I'm adding an additional rank as well!

The new rank is "Contractor" and it'll give you (as we've come to call it in Creeper's Lab) Blue Pants. With this rank, you will be whitelisted for the new world to aide in your creations. As you are all aware of the trusted procedure on Creeper's Lab, the Contractor rank will follow suit. Play in the world awhile and contribute builds to the world to help it grow. Eventually you will be moved to the new rank and whitelisted for the new world.

Four players are being given this rank today, and I thank them for their contributions and loyalty to building in Miranda. They are as follows:

They will immediately find their new rank and be able to access the new world.

I keep speaking of this "world" what is it you ask?

Ouroboros
Symbolizing self-reflexivity or cyclicality, especially in the sense of something constantly re-creating itself, the eternal return.

This is a superflat creative world set to peaceful with perpetual daytime. I've made Ouroboros as a sandbox playground for Contractor rank players of Miranda. There, you are given creative mode to quickly build and test ideas without having to quit the game, open single player, and back in-game, potentially forgetting what you just looked at. You can build something, then swap back right to where you are for easier mirroring in Miranda survival.

There are a few differences naturally: Since this is a playground creative world, there are minimal plugins, no choptree, fastcraft, etc. The world is also cut-off, there is no cross-server chat with the outside world.
Also to prevent players from wanting to just camp in Ouroboros, and since it IS just a test-build world, the contents will not be backed up and the world will be occasionally wiped to clear space for other builds: If you need more time to study a build in Ouroboros to build in Miranda LET ME KNOW, else it WILL be wiped and gone forever.
The total world size is 500x500, which should be plenty enough test-build space for several users. Also, naturally no items are synced between the worlds.

Players with the Contractor rank can swap between Ouroboros and Miranda at will by using /ouroboros and /miranda. This will plop you right where you were previously so you can mirror anything made in Ouroboros.
If you wish to return to the Lobby, you MUST be in Miranda to use the /lobby command.
If there is a problem with Ouroboros, please be sure to contact me directly in IRC or PM me on the forums so I may reboot it, etc. as required. Any questions, feel free to ask.

As always, I thank DrCossack for allowing me to link to his magnificent server and post my news and infos on his website/forum, and other such nonsense. I also think the players who play on, and enjoy Miranda. If you guys didn't join and play, I'd have no reason to run it.

Status of the 1.9 update

I've been running multiple tests using Minecraft 1.9 since its release, stress-testing the performance of the game, evaluating and updating plugins, that sort of stuff. While some of you have been having fun playing on Nena, our temporary 1.9 server, many are looking forward for the entire network to jump over to the new version.

Unfortunately, there are several issues still happening in multiplayer that are major enough to prevent us from moving forward. Most notably, riding minecarts tends to freeze you in such a way that you can't exit the cart or move forward anymore. The only way out is to kill yourself somehow, which isn't exactly fun when you want to keep your inventory! There are also several other problems that arise, like mobs (friendly and hostile) freezing into position and becoming unkillable until the server is restarted; and item drops not behaving properly, making item trading a huge hassle. That's why we're not switching to 1.9 today. My entire code and set of plugins is ready, so we're now depending on other people (Mojang / Spigot / plugin authors) to fix this.

At this point, I don't know when we'll be ready for the upgrade, but it's not going to happen for a week at the very least. More as it comes!

Laurasia's world trim is now complete. Thank you for your patience during this lengthy operation!

The map is currently regenerating, which will take several hours to complete. As we have some disk space to spare, I've used this opportunity to boost the resolution of the 3D map a bit. This allows viewers to see more details in the various structures scattered around the server.

Please note that the judging period for the parkour contest will take a bit longer than usual due to the preparations for our move to Minecraft 1.9 being done at the same time. Likewise, the additions of selected parkour courses to the Games section will happen only after the network has switched to the latest Minecraft version.

If someone wants to help, it turns out that I'm short one judge to evaluate the various courses that have been built. If you haven't entered the competition and want to do this, please contact me!

To let people either complete their ongoing work, fine-tune finished courses, or outright begin working on new ones, I've added a working copy of the world. You can access it from Central's TransHub, under the "Game Dev" label. These are the versions that will eventually go live, so if you've been itching to make some changes, now's your chance! Note that there is no global chat installed in there at the moment; that and the teleporter's location might change later on.

Something to note is that, starting in 1.9, unattached glass panes no longer take a + shape. Instead, they'll only make a small glass pillar, much like how unattached fences currently behave. If you've been using glass panes in your design, you might want to double-check to make sure that it is still playable after the version switch!

This is primarily a place for you to play around the new version while still being linked to the community, while I gradually work my way through addressing all issues related to the upgrade. There are many broken commands and several defective plugins at this point, which will gradually be fixed. On the positive side, you can already enjoy the basic gameplay and cross-server chat!

To access Nena, all you need to do is switch your Minecraft version to 1.9 and join the standard Creeper's Lab entry in your server list: you'll automatically be sent to it. To return to whatever you were doing previously, just set your version back to 1.8.9 and rejoin: you'll reappear where you were!

You might notice some in-game messages about hitting a fallback server. That's normal and caused by the connection point determining which server you need to join depending of your game version.

Please note that nothing in Nena is permanent: this is a temporary server and world, added for the sake of testing, and it will be retired once the entire network is ready to be upgraded. There are no specific rules within, so expect a free-for-all. Enjoy it while it lasts! 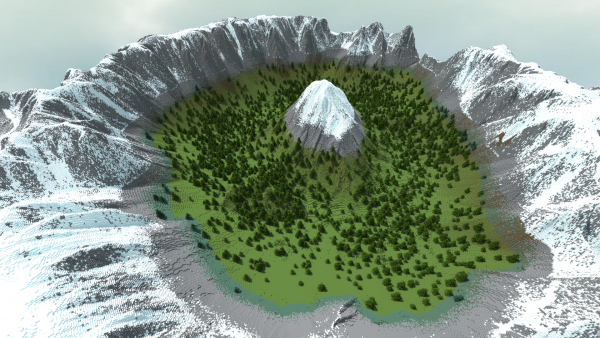