The server migration that happened less than two months ago caused the old Mumble server to go offline. By popular request, I've installed a new one! The new server's address is mumble.creeperslab.net, on port 64738. The password requirement has been removed, so you can simply add the new address to your Mumble client and immediately jump in!

For those of you who don't know, Mumble is a voice chat software that allows you to join a room and talk with other members of the Creeper's Lab while you play. It's lightweight and easy to use, so you can keep it in the background while you're busy on something else! You can find more details, including a download link and installation instructions, on the voice chat page. Don't be afraid to ask others in-game if they'd like to join you for a chat!

After a bit of technical difficulties, we finally managed to hold the event the way it was supposed to happen. Many players will agree that it turned out to be a big success, as well! 12 players were participating at the height of the event, along with more onlookers, and lots of explosions were had.

All the players were gathering points through the various matches, leading to these final results:

Thank you to everyone who participated, and especially for your patience while I was ironing out the final bugs. Your patience was and is appreciated! 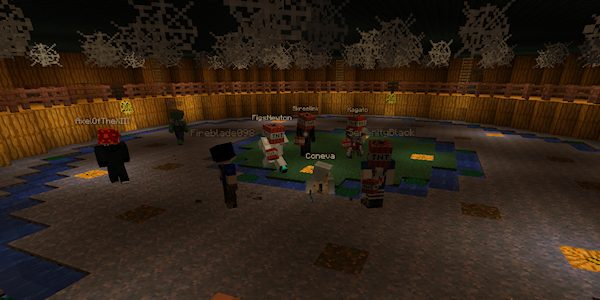 The tag event from last weekend attracted many interested players! Unfortunately, it didn't work as well as expected: a defective server plugin prevented the game from running properly.

Fear not! I discovered the source of the problem and fixed it this week. As such, I'm inviting everyone back for another evening of fun, this Saturday at 10pm, Eastern time.

The rest of the details can be found in my previous news post on the subject. See you there!

Minecraft 1.8.2 has been released today by Mojang, fixing several game bugs. This new version is compatible with both 1.8 and 1.8.1, so you're free to update at your convenience!

UPDATE: 1.8.3 was released as a bug fix, and is also compatible. It's recommended that you skip 1.8.2 and use this one instead.

This Saturday, February the 14th, is Valentine's Day. Since it's a Saturday, it's also time for another Events Night! To show that we love our players, we invite them to be on the server for a large game of tag. Tag... with EXPLOSIVES!!

Skreelink and I, Dr. Cossack, have prepared a game of tag in a brand new arena, Den of the Dead. You're invited to join us this Saturday, at 10pm Eastern time, for a fun game that's easy to understand and play for everyone. You don't need any equipment or practice: you just need to run and punch people! As such, you can just show up at the last minute and join in!

The way the game works is simple: all players enter the game, and when everyone is ready, everyone registered is thrown in the arena. One player is tagged with a TNT block on his head. He must then punch another person quickly to pass it along. When the countdown is over, whoever is "it" explodes, another player is tagged, and the game is over when only one person remains! One twist: whoever is "it" runs faster than the other players, giving them a chance to be free!

The event will run for 45-60 minutes, depending of how many show up, and prizes will be awarded to those with the highest score! You can earn points by passing the tag away and surviving as many rounds as possible.

The more players we have, the more fun this will be! Tell everyone to jump in, and we'll see you for an hopefully explosive event! 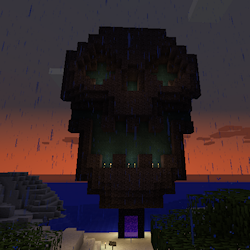 With the migration + merge + move to 1.8 behind us, I'm now considering what the next big step for the Creeper's Lab should be. I have ideas, but I want your thoughts as well. After all, this is your community! To do this, I've prepared a short survey for everyone to answer.

I ran a similar poll at about the same time last year, but a lot of things changed since then, and we have many new faces around. We also have much better hardware, opening up more options. Even if you answered me previously, I'd like to get your input again!

Major hardware upgrade is in!

Tonight's maintenance is over, and the Creeper's Lab's worlds are now running on their own dedicated server! This means that I now fully control the hardware, without any resources shared with other people, and we have a lot more capacity to play with!

What this means for you is less lag, especially when the server has many players online at once. We can also handle more people playing simultaneously, so tell all your friends about us!

This new server has more than 4 times the processing power we had before, and 8 times the available RAM. It also has more disk space, making things easier to manage overall. The new setup also reduces the ping time of all players, so those who engage in PvP and heavy mob fighting can look forward to improved results!

We now have a lot of room for future growth as well: we're not using anything close to the full power of the hardware. I have some ideas on how to keep on adding ways for people to enjoy themselves on the Creeper's Lab; more will be shared in the coming weeks and months!

I'm planning a maintenance period this coming Wednesday, the 4th, in order to move the Minecraft servers to a more powerful hardware platform. During that time, which will take a few hours, the servers will be inaccessible. The address to connect afterwards will not change, so all you'll need to do is wait while the magic happens!

The servers will be down all day due to some maintenance from our server host. Everything will be back online sometime during this evening!

In the meantime, you're free to join us in the chatroom or the forums!

Some brave souls ventured forth, faced the withers, and some of them even came out victorious!

On the first round, 1 vs 1 battles against withers, both DrCossack and UnknownEntity634 managed to score a victory! Coneva, Mikey_el16 and _Josh_555 weren't so lucky.

Then, in a revenge round, the five teamed up and managed to defeat the sudden group of 4 withers at once!

Afterwards, a popular vote led the players to move on to the spleef arena in a set of 1 vs 1 and 1 vs 1 vs 1 battles. Here are the top four winners of that last match, along with their prizes:

Thanks to everyone who showed up, either to participate or fight, and here's hoping that even more of you tag along in the future for more fun events!