Team9000's Minecraft server is now an affiliate of the Creeper's Lab!

Run by StTheo, this server has gone through several incarnations over time. This new affiliation means that the two communities are linked together in-game and through the chat, allowing more players to enjoy the company of others. Players of the Creeper's Lab can also go visit the Team9000 worlds (and vice-versa) through the TransHub in Central. Inventories are being kept separate.

Please note that the Team9000 side is running on its own side of rules and won't be managed by the staff of the Creeper's Lab. Only the usual "family friendly" norm will be enforced, since the chats are tied together.

If you want to learn more about this new place, I suggest that you read this forum topic.

Considering that Avalonia (the survival island) isn't being used and that no one seems to be interested in hosting any projects there, it will be removed from the server in a month. No major structures have been built, so few players will be affected. To anyone who has chests or wants to claim materials from it, you have until April 15 to do so!

Additionally, Gondwana will be spun off on its own server, much like Rodinia is right now. This will free some of the load off the main server and make future maintenance simpler. The change will happen in the coming days and will only require a short downtime of that world; nothing will be lost during the transition, so you don't need to do anything. If you have last logged out in Gondwana, you will find yourself back in Laurasia. Just use the TransHub, as usual, to return to Keystone City and beyond!

Update: Gondwana has been successfully split up!

Please take note that the Post Office (in Laurasia's Nether Central) and the Vault (in Rodinia's Point Zero) have both reopened after being closed for some maintenance. You can now check your in-game mail and drop items for others, as usual!

I Want to Play a Game results!

The goal of the event was simple: rush in a labyrinth, trade an item with a villager, and get out. The difficulty level was raised by the presence of darkness, several mobs, and even fake villagers that'd go and attack the contestants.

A bonus goal involved finding a single piece of wool placed on the maze's floor and shout its color as soon as possible. All objectives were reached! Afterwards, several of the players moved on to a fighting session in the Spider Dome. The following players won prizes:

Thanks to everyone who participated, and to Skreelink for co-hosting another successful event! 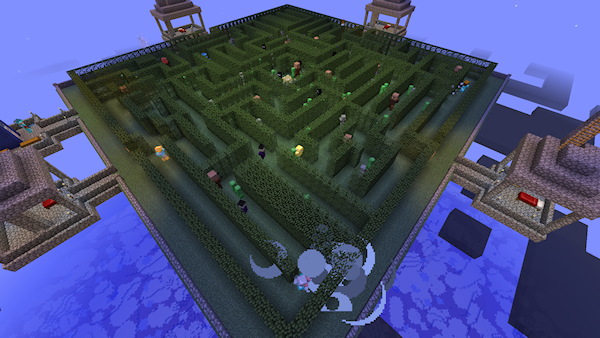 Event: I Want to Play a Game

It's time to try something new! Skreelink and I have prepared another event to entertain selected guests this Saturday, March 7th, at 9:30pm Eastern time. Read on for the details!

I know I've a reputation for being the Wither Master, but I don't want you to think all events ran by me involve you facing withers! So I've teamed up with the SquidGod, DrCossack to put this one together with an interesting premise... Competition mazing!

The tl;dr: Everyone will rush into a maze to get an important item and find their way back out.

For those who want a bit more reading: we'll all meet up at the dreaded... Death Labyrinth! The wonderous PvP maze built by our own Toad_ (Kingdaddytoad). Everyone will grab a single trade-item out of a chest and gather at the four entrances.

After a countdown, everyone will run in and search through the maze to find a loan villager and trade with him. Afterwards, find your way back out of the maze and bring me (Skreelink) the item you received from the trade.

Here's the interesting feature: The entire maze is overshadowed by another maze and mob spawning IS on, so you might come across some enemies along your way! Fight the darkness and the mobs to find our innocent villager and get that trade. You ALSO have to worry about your comrades, PvP is enabled, so they can be a bother. If you happen to get killed, rush back in and keep trying! Happenchance you die AFTER you get the trade, you forfeit the item. Grab another from the chest and go back in to try again.

The first three to make it back alive with the precious item will win prizes. What are they? Who knows! There is also a bonus goal: a single wool block has been planted in the maze. The first player to SHOUT the correct color of the block will get something special!

Afterwards is player's choice: we can do PvP at the maze, another arena, or Spider Dome. Remember, the new Den of the Dead IS a PvP arena, it's NOT just for TNT tag!

I hope to see you all there to make this an A-Maze-ing night! (See what I did thar? Maybe I should be TRIBUTEd...)

As a further reinforcement after last weekend's promotion, Skreelink will now have the Op rank! He's already familiar with most of the tools and is frequently around either in the game or the chatroom, so you'll be able to count on him should you need any op's assistance.

To improve how the staff members are available to assist our player base, I'm happy to announce that SoraThePumpking is back with us on the Helper rank! As with other helpers and ops, he'll be available to answer your questions, clarify the rules if needed, and get you unstuck should a server bug try to eat you alive.